I went to see the Raveonettes last night

Which is funny because I haven’t really been that into the Raveonettes since Whip It On…I like the last half of their new album Raven From the Grave okay. For me it sags a little in the middle, goes a little too soft and sweet and atmospheric.

Still, the show was pretty great. They’re playing most of their songs with two drummers, both playing not-quite-complete kits with a snare, a big floor tom, a tambourine and a crash cymbal…when they’re both pounding really primitive beats, something wild happens in the contrast between the melting ice cream sweetness of the vocals (a good bit of the time in harmony) and the screech and squall of the guitars. They are fairly committed to the effects pedal…I counted 18 of them on the floor, and Sune had, I think, a chart that sketched out which was which.

There were also lots of strobe lights 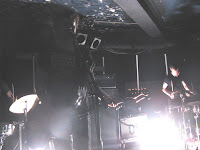 Tamaryn opened, and, unfortunately, I missed most of it. (Whoever heard of a band starting on time?) But what I heard, the last song, sounded pretty great, more girl-fronted shoe-gazery, though slipping more towards Zola Jesus’ damaged, demon-ridden end of things than Sharin Foo’s pop-and-drone.

Here's "Forget That You're Young" which was one of the encore songs. 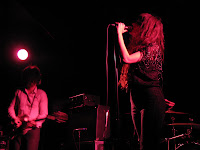 There will be more on this at Blurt later.
Posted by jenniferpkelly at 6:29 AM

that gig sounds amazing! I love the Ravonettes. What a set up - 2 drummers, 18 effects pedals and Sharin Foo? Where do I get a ticket?

Agreed about the new album, kind of sag but the start and end are great - the last track is pretty killuh.

Yeah it was good. I saw them on the Whip It On tour, and, though I probably like those songs better, they've gotten way, way, way tighter and better at performing live since. They played "Tornado" and "Attack of the Ghost Riders" from the first album, maybe one other.

I'm not sure where you are, but they've been playing all over the place...maybe just US, not sure.

Indian Jewelry had a similar double-drum setup when I saw them open for Holy Fuck, and it was AWESOME (their new record is fine, but a recording of that show might have been my album of the year).

I'm in the UK, Brighton - only two shows on the tour, and they;re not their own gigs by the looks of it. shame. Attack of the Ghost Riders is especially awesome. I remember (somehow, given my enhanced mental state) seeing them at Reading festival and dancing like a lunatic the entire set. It's great dance music.

Ian - Indian Jewelry were/are nothing like I'd expected them to be. The album is great and the live show destroys. Hadn't anticipated such an aggressive rhythm/noise assault, like Blank Dogs & Excepter combined

The Dirtbombs used to play with two drummers and, of course, Tortoise, but this was different because it was so stripped down and simple and they were playing exactly the same thing. It was pretty brutal, in its way, and it really pumped up the songs. I'd like to see Indian Jewelry someday, Ian....

Our show sked has been pretty sparse all winter, too, but it looks like it's picking up. They just added Psychic Paramount at the Iron Horse...have to try to make that. Also, possibly Yuck and maybe Jonny/Apex Manor, not sure.

I remember thinking at the Indian Jewelry show that they sounded like Spacemen 3 x the Stooges, which is hyperbolic and not even THAT accurate, but sums up my reaction pretty nicely.

My next big show (after seeing Timber Timbre and Picastro recently) is two nights of Godspeed in Toronto...

You probably didn't miss much with Tamaryn. I saw them April 5th and their live act was very disappointing. She just stood there with no presence at all. It really put down my enthusiasm to hear the record (although it's excellent). The guitarist was superb, though. I was really impressed by him. The Raveonettes were great. I was quite happy to see them finally. Did you see the amps with "Rave On" stencilled on them? My girlfriend and I were rather amused by that.