I was in Philadelphia and then NYC this weekend and had a really pretty great time.

I ran the Philadelphia Marathon on Sunday (3:48 something I think...maybe 3:49) and did not spectacularly, but not so terrible.

I also visited the Philadelphia Art Museum, where the special exhibit was by an Italian artist named Michaelangelo Pistoletto, who was, among other things, apparently fascinated with mirrors. He painted on them, lifesize figures on mirror-like backgrounds, which is cool, because when you go to look at them, you and other other people in the museum are also, sort of, in the painting. And when they are on facing walls, you can see the painting you’re looking at and the one behind it and, reflected in that, the one you’re looking at, and so on and so on and so on. You can see me taking a photo in this one. 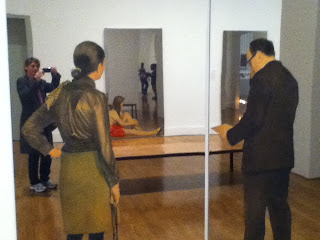 I also went to NYC and did not very much of note, but got to see a few of my friends and had a couple of very nice meals, so that was good.

And now I’m back and have all kinds of stuff up on the web, including this review of a record by Masonic, when ran yesterday in Venus.

This Texas dream pop outfit spins bittersweet webs of Left Banke-ish melody over the muted roar of shoegazy guitar effects on their fifth full-length album. Three of the five Masonic’s are brothers—John and Kevin Mason switching off on guitar and keyboards, sibling Brian on rackety, dust-kicking drums—but their not-so-secret weapon is singer Eryn Gettys. She has a glossy, early ‘60s pop voice, warm and sweetly luxuriant, buoyant and breezy yet undercut with hard-won experience. An undercurrent of vulnerability, as on the plaintive “They Wanted So Much,” in Gettys unfailingly smooth, on-key delivery connects her to the craft of French café singers, while a dreamy gauziness ties her to ‘90s vocalists like the Sundays’ Harriett Wheeler. She is poised and professional, even mildly detached, as she sings about the most rueful sort of romantic discoveries.


“Lifetime of Deception”
Posted by jenniferpkelly at 11:11 AM