I might have mentioned I was going to this...review's up today at Blurt. 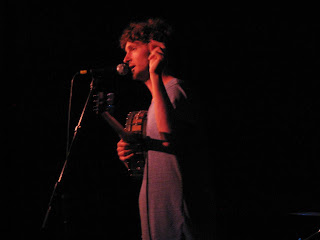 It’s a family affair: the show at the Iron Horse included Wes Hartley and the Tall Trees.

“All music is folk music,” Sam Amidon says, midway through a stripped down, unaccompanied set of plaintive shape note hymns, shaded in intriguingly modern ways. He goes so far as to include Gangstarr in the “folk music” category, since rap is, obviously, a music of the people, but he might as well be making room for his own very traditional, but also not, form of folk music, which finds doubt and ambiguity between the notes of even the most righteous of sacred harp certainties.

Amidon is playing at the Iron Horse in Northampton, just a stone’s throw from the southern Vermont community where he first learned to sing (and play guitar, banjo and fiddle) at sacred harp gatherings. His father and mother, still active in local singing groups, are in the audience this evening, and it turns out that 1936 Gibson Amidon is playing (and which has beautiful, luminous tone) belongs to his father. His regular guitar has a hole in it, courtesy of the TSA, who put the capo under the body of the guitar in its case after inspecting it.

He did a nice interview show for New Hampshire Public Radio yesterday, too.
Posted by jenniferpkelly at 6:29 AM