So except for a little bit at the end, I'm going to take a break from the music for one post, and tell whoever's interested (and possibly some hapless music people who aren't) about today. This was the day I drove Sean to Providence RI to try out for Book of Mormon.

We got there way early, so found the place, convinced ourselves we hadn't found the place, reconfirmed that this was the place and left to kill a couple of hours around Brown. Brown is a lovely campus, mostly closed today with the kids on summer break, but beautifully gothic and hilly and there are of places where you can huff up an incline through neighborhoods that belong in an Emily Dickenson poem, then look back down into an extremely modern, glass-tower-and-factory-type city. I believe I enjoyed this part more than Sean did, because he was still pretty antsy about his audition. We had some tea at a tea-only café on the main drag at Brown and Sean said, without prompting, "I'm so glad I'm going to school in a real city." Take that Providence. Take that Brown. 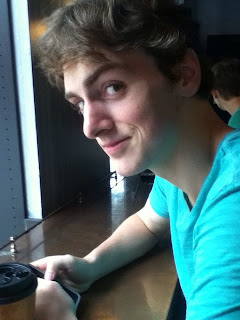 So, Sean's slot was at 11:30 and we headed back to the car around 11 to make sure we had time. The audition was being held in a very nondescript, not especially central neightborhood of one- and two- and three-story multifamilies. The audition was actually in a converted fire station (I didn't go in, so I can't tell you much about it, like whether the pole was still in there, etc.) When we arrived the first time, two hours early, I was convinced we had the address wrong. We didn't. There was an elementary school across the street, so this is where I parked and Sean went in by himself.

This paragraph is pure hearsay, based on what Sean told me after. Sean got to see a few of the other auditioners, some pretty good, some not. Most of them were trying out for the other part (whose name escapes me at the moment), not McKinley (who sings the "Turn It Off" song about suppressing gay thoughts). Sean chose McKinley because it had only one short high B in it, not a lot of sustained ones. He said he hit the B and all the other notes. He felt like he did reasonably well. He felt pretty certain that nothing would happen. He is almost surely right. He is, after all, barely 18, has only been taking singing lessons for a few months and has learned everything he knows about tap dancing from Youtube. (But someday...)

So anyway here's what I learned about professional auditions (from the parking lot):
1. They are not very glamorous. The neighborhood looked sort of like one I used to walk through on the way home from junior high, lower middle, not dangerous, but not remotely evocative of "Smash."
2. They don't take very long. Sean was in and out in 20 minutes.
3. They are more fun to think about than to actually experience. (Which is true of a lot of things.)

But on the other hand, we had a really good time afterwards, stopping in Northampton for Mexican (Sean -- chicken tamales, me -- cheese quesadillas, both -- plantains) and going to Turn it Up afterwards, where I found a bunch of really cool stuff, a Loren Connors box set, which I did not buy, and a CD reissue of the Monks Black Monk Time which I did.

Ahem, music at the end, did I say?


The whole thing was, obviously, bittersweet, since I have spent the last 18 years doing silly things with Sean and he is about to go off and do silly things with other people. But it was mostly very sweet, and I loved being a part of it.

Posted by jenniferpkelly at 1:42 PM